Just the other night…

As you well know, some of us have been lucky not to have had brushes with the authorities on our way home from the various social occasions over the years.

A couple of nights ago, I was out for a few drinks with some friends and had a few too many beers and then topped it off with a margarita. Not a good idea.

Knowing full well I was over the limit, I did something I’ve never done before:
I took a taxi home.

Sure enough I passed a police road block but because it was a taxi, they waved it on through.  I arrived home safely without incident, which was a real surprise.

I have never driven a taxi before and am not sure where I got it.

Filed under Joke of the Month, Poker Night in America 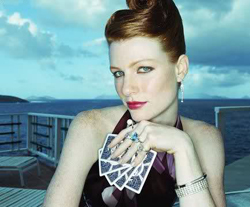 You are playing Texas Hold’em and the flop gives you a flush draw.  It’s likely that you have almost a 50 percent chance to hit a winning hand.  If you check, you are giving up a chance to take down the pot “using a bet.”  This is where you will see a lot of players make a semi-bluff.  That is a pot-size bet that’s intended to get low to medium pairs to fold giving you the pot.  But if they stay, you still have a chance to win on the turn and the river by hitting your flush. The semi-bluff is a good way to bluff and feel good about it, even if it doesn’t work.  If the bluff fails you still have a good chance of drawing the best hand.  Bluff with confidence…

Good Winners and Good Losers
It is no fun losing at anything and poker is no different. But it is unpleasant, to say the least, to be beaten by someone who taunts and dances at your demise. Show a little class and win like a man or woman who has won and lost before themselves. When you win congratulate the loser on his or her play – and if you lose, do the same. It is simple and respectful to them, yourself and to poker. We want ladies and gentlemen playing this great American card game. Be an ambassador of poker and respect your opponent. You just might find that you are treated the way you want to be treated the next time you take a bad beat.

How To Start A Poker Night Group

1.  Decide what kind of poker group you want to generate:  I think poker night has generally been associated with guys meeting to play. With the popularity of poker on TV we see every one joining in to try their luck, and it is spreading fast. We have a mixed group with couples and singles participating, a lot of joking with a party atmosphere. Nothing wrong with an all male or all female group either. They can all be great depending on how they all get along… the group chemistry will make a difference.

2.  Decide what kind of games you will play:  This is important, because as friendly as dealers choice sounds, it can be the basis of a lot of disagreement and wild cards. While you can make a lot better poker hands, they throw off the odds dramatically. I recommend straight poker without wild cards. Start with games like seven card stud, Texas Hold-em maybe high-low split games without wild cards. The simpler the better, is a good rule of thumb, but suit yourself. I played in a dealer’s choice game for 20 years and it was hard to keep up with all the changing rules from game to game, but it was a lot of fun. Some of the games got really expensive. It should be acceptable to sit out a hand if you don’t like the game being dealt. We chose Texas Hold-em tournament style because it’is east to deal and it teaches new players the basics of poker without all the confusion of the rules changing, like in a dealers choice game. We had several new players and they are getting pretty good now… after four years of playing almost every week. They’re now talking about playing in a tournament at the Chumash Casino. That’s progress…

3.  Find a place to play: A rotating game is great where everybody hosts a poker night is good, but if you have a place like a man cave set up for poker, that is best. A bar with lighted beer signs for atmosphere, a good refrigerator for the ice and beverage of choice that everyone will be bringing. Also a round green felt poker table with plenty of room around it, that is ideal. We played for 10 years at Danny’s garage. We wrote the names of players owing at the end of the night on the wall by his water heater. It became known as the “wall of shame” for obvious reasons. Then moved to the American Legion Hall for another 10 years. The Mayor of Carpinteria (Tom Lewis) never missed a game and he had the keys to the facility, where we played every poker game imaginable. Tom Lewis passed last year. He was the longest running mayor in our little coastal town, a very good man and he was a true Poker Ambassador.

Filed under Poker Night in America, Start a Poker Group

I want to go pro… 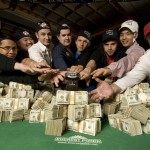 I’m not a professional and never have been, but if you want to give it a go the only reference that I have is from a story about a great pool player who once said when asked “What advice would you give a youth wanting to be a pool hustler?”  His answer was simply, “Get yourself a good job, you’re going to need it!”

Aside from that, start with a pot of money and playing when you can, and make it grow.  Use only that money to play with, and when you can see a consistent growth, and if you can justify the lifestyle with your family responsibilities, have at it.  Be ready for a grind, from what I can see it’s not easy.